In late 1996, Australian Researcher Damian Shanahan's discovery of several censored clips from early Doctor Who stories (see Recovering the Past ) encouraged the team to approach BBC Video with a plan to produce a restored version of the 1966 William Hartnell story 'The War Machines' for future video release. Steve Roberts and Paul Vanezis take up the story....

Until the mid-eighties, 'The War Machines' was one of the many stories from the Hartnell and Troughton eras that was missing from the BBC Film and Videotape Library. However, all four episodes were returned by a television station in Nigeria in 1984, albeit incomplete. These episodes were in the form of 16mm film recordings, which had been to other countries before Nigeria, and had suffered somewhat at the hands of foreign censors. An uncut copy of episode two had also been obtained from Australian collector David Gee, from a print acquired by his father in the seventies. The BBC's copy was in the form of a negative taken from this print, and although complete, it was much poorer quality than the Nigerian print and had suffered some projector damage in the past. 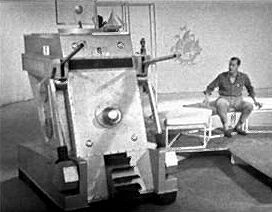 By a remarkable coincidence, a clip excised from the Nigerian print of episode four was known to exist in an edition of the children's magazine programme 'Blue Peter'. This was the infamous scene of a War Machine attacking a man in a telephone box, which had been used on 'Blue Peter' in an item introducing the forthcoming story. The Australian clips contained material missing from episode three, and off-air audio recordings for all four episodes were made available courtesy of Graham Strong's collection. We were therefore in a position to restore the story to an almost complete form.

Paul Vanezis and freelance writer Richard Molesworth compared the existing footage with the off-air audios in order to draw up a list of the cuts made to the episodes. These were:-

1. The first scene, a reprise of the cliffhanger from the previous episode, is virtually cut in half. It should be possible to reinstate it from the end of episode two, although this will necessitate picking one shot up halfway through. This will restore approximately thirty seconds.

2. One line of the conversation between Brett and Krimpton about the programming of the machines is missing (missing section underlined).

Visually, the cut is part way through "Machines...." through to "....life that...". The first visible wording that Krimpton is seen to be speaking is "...opposes them." Our suggestion was that we cut to a shot of Wotan at the cut to Krimpton and back to him for "...opposes them.", replacing the missing dialogue from off-air audios. 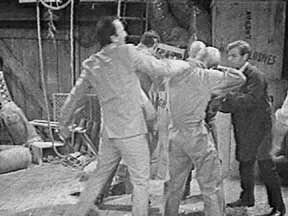 3. Two lines of Major Green's orders to the workers are cut. This is the sequence where a tired worker states that humans who wear out must be eliminated. This is one of the sections that was recovered in Australia. Although the end frame of the cut to the episode is matched by the end frame of the recovered sequence, there are several frames missing at the front of the clip. We thought it possible that we could utilise a shot of a War Machine moving through the warehouse to cover this jump. The missing section is 17 seconds approx.

4. Two entire sections have been removed from the army's attack on the warehouse. One sequence lasting 37 seconds approximately existed frame for frame in the material from Australia and could be reinstated completely.

By adding the missing dialogue and the two film sequences, approximately 1 minute 45 seconds could be restored to the episode. This still leaves the episode short by approximately one minute - this is one long chunk of the episode in the warehouse battle scene, which was excised by overseas censors. 1. A visible break in the film at approximately eight minutes in could be repaired by extending the audio.

2. Scene of a War Machine demolishing a telephone box is deleted, but exists in the 'Blue Peter' item. Part of the continuing closeup of the man talking on the telephone is missing, but this could be compensated for by continuing in audio-only over the top of the beginning of the high shot of the phone box. Luckily, the section used in 'Blue Peter' still retains the very beginning of the shot, not actually used in the episode.

3. Two lines of dialogue are missing when Polly reports back to WOTAN

Krimpton's last line is seen, although the sound is missing (due to the 16 frame offset between sound and pictures on 16mm film). We thought that this shot could be reinstated by incorporating shots of Wotan from other episodes.

A total of 17 seconds is missing from this episode. 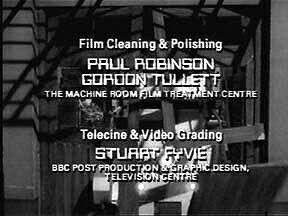 In order to produce the highest quality results, we needed access to the original Nigerian prints. These are 'A' - status (Archived) prints, which are not normally released for anything other than striking of a new film copy. However, BBC Television Archivist Christine Slattery was kind enough to give permission for the release of the prints to us on this occasion. They were sent to a specialist film cleaning company, where they were first ultrasonically cleaned in a film cleaning machine and then polished to remove surface imperfections. The polishing process consists of running the film against a glass wheel coated in acetone for a few seconds - the acetone actually melts the surface of the film, removing minor scratches! All the prints were then inspected by hand in order to assess any remaining damage, which might have meant transferring the film to tape using a wetgate telecine. Fortunately, the prints were declared to be in very good condition. The projector damage visible on the complete neg. of episode two was unfortunately not repairable - it was the print that the neg. had been taken from that had been damaged, and we were denied access to it by David Gee.

All four prints, plus the neg. of episode two, were transferred to Digital Betacam videotape using a MK3 telecine at Television Centre. At the same time, the optical soundtrack on the first two episodes were transferred onto Digital Audio Tape. These tapes were sent up to BBC Pebble Mill, where Paul Vanezis oversaw the edit to reinsert the required sections from the Australian clips and 'Blue Peter'. Sections missing from the good quality print of episode two were reinserted from the poorer quality neg. Unfortunately, no appropriate visual cutaways could be found to cover the missing scene between Polly, Brett and Krimpton in episode four, so the team were reluctantly forced to drop it. This was the only part of the work detailed above that we were unable to restore. DAT copies of the completed edits were then despatched for audio restoration work by Mark Ayres, a composer and audio specialist with strong links to 'Doctor Who'. Mark's job was to integrate the various sources into one seamless soundtrack and reduce hiss and pops from the optical soundtrack. A full and comprehensive account of his excellent work can be found in the Audio Restoration Report on Mark's own site. 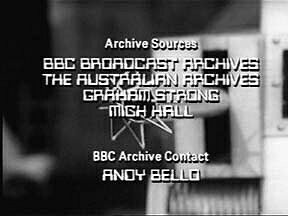 The team met again three weeks later in one of the Film Post Production Areas at Television Centre, for preparation of the Home Video master tape. BBC Senior Post Production Operator Stuart Fyvie was responsible for putting the tape together. The first job was to lay down the BBC Worldwide logo, copyright notices and anti-piracy trailer, followed by packshots of the forthcoming books in the new BBC Doctor Who range. As an added bonus, we then put on the entire three-minute 'Blue Peter' sequence, as it served as both an introduction to the story and a bonus for the buyer. A chance comment by Jan Vincent-Rudzki resulted in us searching out and inserting an original BBC Presentation globe from the period, complete with 'This is BBC1' voice-over, immediately prior to episode one, just as it would originally have been seen.

Stuart's main job was to 'grade' the episodes prior to transfer from the master tape. Grading is a shot-by-shot process in which the brightness and contrast of a scene is altered to remove any variations, aperture correction is added to sharpen up the picture, and the amount of digital noise and scratch concealment is adjusted to ensure maximum effectiveness without producing artefacts.

This was achieved using a Pogle linked to a Digital Vision DVNR-1000. After grading, each episode was laid down onto the master tape. Finally, restoration credits in the style of the original were laid down over a montage assembled from an original 35mm film insert from episode three, kindly loaned by Mick Hall.

We were very pleased to be joined during the day by both Stephen Cole from BBC Video and Michael Ferguson, the director of the 'The War Machines'. Michael was both pleased and amazed that people were lavishing such care and attention on his thirty year old programme!

'The War Machines' was released in the UK by BBC Video in June 1997. The sleeve is in a special gatefold format and includes detailed notes on the reconstruction. Unfortunately, there have been significant duplication problems with the UK version of this title. For more information, please see the article UK Duplication Problems.

For a more detailed look at the restoration of this story, please see Richard Molesworth's article 'The War Machines - 1997 Style!', originally published in Doctor Who Magazine issue 253.