2004's first release is the popular Peter Davison story 'The Visitation', which sees the Doctor and his companions fighting to stop a stranded Terileptil from unleashing plague-rats in order to depopulate the Earth...

'The Visitation' was shot using the traditional combination of studio video recorded on 2" quad videotape and 16mm location film. As with the previous Davison DVD release, 'Earthshock', the 16mm film sequences still exist and so it was possible to retransfer the transmission prints and re-insert them into the programme to improve the quality.

Although the A/B roll negs exist, it was decided that retransferring them would be too complicated and expensive in this instance, as around half the story takes place on film. A/B roll negs are designed to be optically printed using a continuous motion printer, not transferred to video via a telecine. The problem is that the splices tend to catch on the various rollers in the telecine film path, causing the image to bounce near the splice. With 'Earthshock' we had to digitally stabilise a lot of shots afterwards to stop them bouncing - a costly and time-intensive process which we could not justify this time because of the large amount of film in 'The Visitation'. However, the new transfer of the TX print is a definite improvement over the 1982 telecine transfer.

The programmes were transferred to Digital Betacam videotape via the Transform Decoder by Jonathan Wood, as per our standard way of working. The studio video  sections were given a light DVNR to reduce video noise, then dropouts cleaned up on Scratchbox and a vision mixer as usual. The TX prints were transferred on the Spirit and then dropped back into the correct places on the videotapes. This process revealed a few scene extensions that had been chopped out of the transmitted version and it also showed that quite a lot of further editing had taken place on VT after the film edit - in fact almost every shot in the first film sequence had been tightened by anywhere between a frame and a few seconds! The more interesting shots were compiled into a 'Film Trims' featurette for inclusion on the DVD.

In parallel to the picture cleanup, the audio was being treated by Mark Ayres and was then re-laid back to the Digital Betacam tapes. Paddy Kingsland's music for the story exists, so Mark also took the opportunity to put together an isolated score for the DVD.

A commentary featuring all four of the TARDIS crew - Peter Davison, Janet Fielding, Sarah Sutton and Matthew Waterhouse - and the story's director, Peter Moffatt, was recorded. 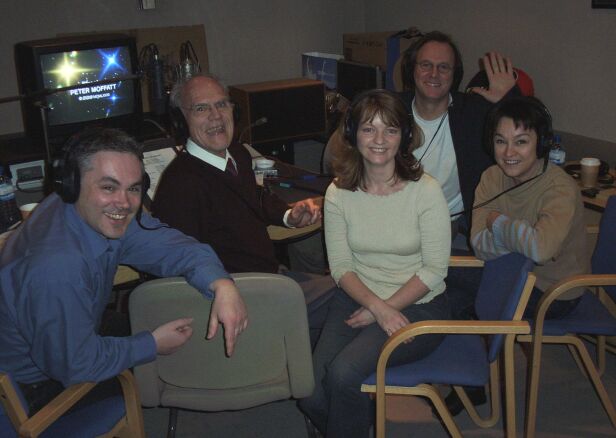 Meanwhile, John Kelly took on the unenviable task of producing and editing not one but three individual featurettes for the disc:-

Directing Who - Peter Moffatt is a 26 minute featurette based around an interview conducted by John and Peter Finklestone earlier in the year, covering all of the stories Peter Moffatt worked on. He talks with great affection about his time on the show and many of the people he worked with.

Writing a Final Visitation is a 12 minute featurette about writer Eric Saward's work on the story, from an interview with Eric  conducted by Richard Molesworth in the story's location, Black Park, in mid-September 2003.

Scoring The Visitation is a short interview with composer Paddy Kingsland specifically talking about his score for 'The Visitation'. This is just a small part of a two-hour interview shot on three cameras in Paddy's West London studio, with Mark Ayres taking Paddy right through his career at the BBC Radiophonic Workshop and talking in-depth about all of his Doctor Who scores.

A picture gallery was assembled as usual by Ralph Montagu and Richard Molesworth once again provided a production subtitle commentary.