A rare opportunity for location filming in Spain provides the sumptuous backdrop to this classic adventure starring both Patrick Troughton and Colin Baker as the Doctor, pitted against old enemies the Sontarans and their new Androgum allies...

'The Two Doctors' was shot as combination of 1" studio videotape and 16mm location film. Unfortunately, the location film no longer exists in the BBC archives, so it was not possible to retransfer it from scratch, as had proved so successful with 'Earthshock' earlier in the year.

The D3 digital videotape copies of the original 1" analogue transmission masters for the story were transferred to Digital Betacam tape via the BBC Research Department's Transform PAL Decoder for optimum image quality. A very small amount of digital noise reduction was used to quieten video noise in the picture. The film sequences were dubbed off independently and cleaned up frame by frame on Scratchbox before being relaid into the episode tapes, with a small amount of grading applied to give better colour continuity between shots than had been achieved during production. The soundtrack was remastered by Mark Ayres to remove hiss.

Extras for this release include:- 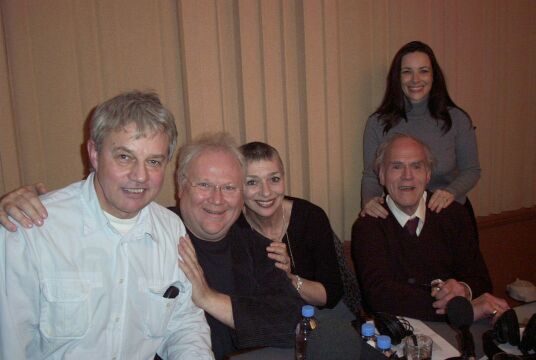 A Fix with Sontarans - a short mini-episode from 'Jim'll Fix It'. (approx 10 mins)

Behind the Sofa - Robert Holmes & Doctor Who - a featurette about the work of the acclaimed Doctor Who writer and script editor. (approx 45 mins)

Beneath the Lights - in studio during recording of part of episode one. (approx 25 mins)

Beneath the Sun - VHS-sourced raw takes from the location filming in Spain. (Approx 35 mins.)

Adventures in Time and Spain - Production Manager Gary Downie talks about the trials and tribulations of working in a foreign location. (Approx 30 mins)

Wavelength - a radio production from 1984 following the cast and crew as they record the story. (Approx 29 mins).