'The Mind of Evil'

'The Mind of Evil' is the only Jon Pertwee story for which no colour episodes exist, although a few minutes of colour from the final episode survive from a domestic recording. The Restoration Team were asked to oversee the remastering of this six-part story for release by BBC Video in May 1998... It was clear from the beginning that the surviving colour footage, about four minutes of episode six recorded off-air on a domestic Betamax recorder in the United States in the late seventies, should be included in the video release. This would take the form of a colour restoration, combining broadcast-quality monochrome film recordings with the colour from the domestic video recording - the same technique that had initially brought the team together in 1992 for 'The Daemons'. Although the possibility of re-integrating the colour footage into the monochrome episode was considered, it was decided very early on that this would distract the viewer, so it would be placed at the end of the tape as a bonus.

Although a colour restoration of this material had actually been completed before (for Ralph Montagu's vignette of the Master, transmitted prior to episode five of 'Planet of the Daleks' in 1993), we decided to redo the work from scratch because better quality copies of the colour recordings had subsequently been recovered. Ralph oversaw the colour restoration in January 1998, using the same basic techniques we used in 1992, but updated somewhat to make full use of the newer digital video technology available. Whilst all the previous colour restorations were sourced from Ian Levine's NTSC U-matic copies of the Betamax off-air recordings, 'The Mind of Evil' colour was sourced by a more direct route, the original NTSC Betamax recording being copied onto NTSC Betacam in 1996. The tape was kindly loaned by Chicago based Larry Charet, and transferred at Vidipax in New York. Vidipax are the leaders in the replay of obsolete NTSC tape formats, and Ralph met its owner Jim Lindner at a Film and Video Restoration Conference. Larry Charet was a friend of Tom Lundy who recorded a lot of Pertwee episodes on Betamax, but he has subsequently moved away from Chicago and cannot be traced. Ralph also produced a photographic montage utilising original production stills from the story, which was overlaid with captions explaining the background to the colour sequence which followed. The middle part of this sequence features the infamous 'Keller Machine wobble' effect, which was originally created in the studio by feeding a sine-wave audio signal into the scan coils of the EMI-2001 cameras! It was recreated for the nineties using the video effects software in an Avid non-linear editor. Mark Ayres and Ralph put together a background audio track for the sequence, consisting of various original sound effects, which really helped create an authentic feel.

At the beginning of February, Steve Roberts co-ordinated the remastering and creation of the Home Video duplication masters. This work took place in Grading Suite 1 at Television Centre, Post Production's newest digital telecine suite, featuring a Pogle grading engine, a Digital Vision DVNR-1000 dirt and scratch concealer and a wetgate. This was actually the first time that the new wet-gate had been used for a real job and its performance was impressive.

For some reason, the BBC Film and Videotape Library had no prints of four of the six episodes. Although we did have tacit permission to work from the original negatives as a last resort, they decided to make new prints of these four episodes. The two existing prints were cleaned and polished before they were sent to us, so we were effectively working with virgin 16mm prints. This rather negated the requirement for the wetgate, but we used it anyway as it was a good test of the system. In practice, everyone agreed that the pictures were much better wet than dry. The images were very 'clean' and there was a noticeable reduction in flare because the internal reflections in the gate assembly had been reduced by there only being one effective optical surface within the gate lenses - ie glass/(solvent and film)/glass rather than glass/air/film/air/glass as it would have been if running dry.

The day's work was carried out by Dave Hawley, a senior post-production operator whose expertise had been called on many times since his original work with the team on the restoration of 'The Daemons'. Two master videotapes were recorded, a Digital Betacam safety copy which would subsequently be used to make master videotape copies for the Library, and a D3 duplication master for Home Video. 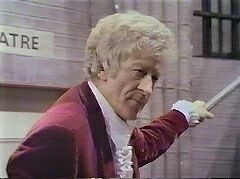 Although it was standard practice to make sound masters on 16mm magnetic film at the time the film recordings were made, these appear to have been lost or destroyed in the past. We were forced to use the lower quality optical soundtrack on the films, which weren't particularly good. We processed the audio through a Dolby Cinema noise reduction unit in 'optical clean-up' mode and, although this is fairly old analogue technology, the results were impressive, providing a great reduction in hiss without noticeably affecting the high-frequency programme content.

Obviously, the wet-gate process can only deal with physical damage to the surface of the print, so to combat problems such as dirt and sparkle printed-in from the negative, we employed the DVNR-1000 digital dirt and scratch concealer to automatically reduce the film grain and remove single-frame dirt and sparkle components below a certain size. Larger 'blobs' were dealt with manually, either by inserting a small section from the previous frame, or by programming the DVNR-1000 to process the picture quite savagely, but only for the single problem frame. The viewer will still see signs of dirt and sparkle, but removing these by hand would have been a very time-consuming business and outside the constraints of our budget. In certain shots of the Keller Machine effect being mixed in and out, there appears to have been a problem with the film recorder which caused broad bands of disturbance across the screen. This effect has been greatly reduced, but it was not possible to remove it entirely.

When monochrome film recordings were made from a colour source, it was normal practice to insert a subcarrier notch filter into the video feed. This is to remove the colour information, which in the PAL system is centred around a 4.43MHz subcarrier. If filtering is not employed, subsequent scanning of the film will produce spurious signals around the subcarrier frequency, which are misinterpreted by the monitor or TV set as colour information, producing annoying flickering bands of colour all over the picture. Although episode one appears to have been made using a notch filter, it was quite clear that the subsequent episodes had not - they were absolutely crawling with spurious colour. This was removed by using a PAL subcarrier pre-filter within the DVNR-1000. It is a tribute to the sharpness of the prints that the filter had to be turned up to maximum to totally remove the problem. At the beginning of episode six, there is a film sequence involving UNIT storming the prison. Unfortunately, the telecine playing this sequence into the studio originally was not in the correct picture phase. Without going into too much technical detail, this means that a single frame on the film recording originated from two different frames on the original film sequence, which results in double-imaging on any movement in the film sequence. Fortunately, this same film sequence had been employed in a much longer form at the end of the previous episode and that time the telecine had been correctly phased. We were able to recreate the episode six film sequences using material from episode five and the improvement was very noticeable.

Finally, the colour sequence that Ralph put together was colour-corrected and added after episode six. This actually took a fair amount of time because the ex-NTSC colour information was not particularly well matched to the luminance components of the film.