2004's fourth release is the story that opened Season 18 and ushered-in radical changes to the series. New producer John Nathan-Turner decided to start his job with a new broom, sweeping away the traditional title and incidental music in favour of new radiophonic commissions, premiering a brand-new title sequence and introducing a more serious, scientific feel to the stories. 'The Leisure Hive' is a bold step forward from what had been seen before and viewers can only feel disappointed that Lovett Bickford was never given a chance to direct another Doctor Who story... 'The Leisure Hive' famously opens with a ninety second pan across the colourfully-striped huts on Brighton beach, before revealing the TARDIS and the Doctor, asleep in a deck-chair. This sequence, along with the subsequent scenes on the beach and a couple of model effects were shot on 16mm film, as with the majority of Doctor Who location work of the time. The rest of the story was shot entirely in studio onto 2" quad videotape, with Lovett Bickford opting to tell his story in a more cinematic way by utilising a large amount of single camera work as opposed to the more usual multi-camera studio shoot. The story also features extensive use of the then-new Quantel 5000 DVE, which could zoom and reposition pictures. Bickford immediately put this to use to create the first ever TARDIS materialisation on a moving shot - simply achieved by preparing the TARDIS materialisation on videotape first, then starting with the Quantel zoomed in and zooming back out to fullscreen to reveal the TARDIS as it materialises. Although a brave  and innovative attempt, it is somewhat let down by the jerky zoom control and the very poor quality of the zoomed-in picture through the Quantel. This lowering of the picture quality can be seen on various shots throughout the show, presumably as Bickford was allowing himself the luxury of re-framing shots after the studio recording. Unfortunately, although much better results could be achieved with today's DVE's, the original studio recordings no longer exist, so these zooms are presented as originally seen.

Remastering work started from the BBC's D3 digital videotape copies of the original 2" transmission spools which, like all the BBC's 2" tapes, now reside at the NFTVA. The D3's composite video output was decoded via Research Department's Transform PAL Decoder for optimum quality and recorded onto Digital Betacam videotape. Subsequent cleanup work was done from these tapes to create the new DVD masters, with DAT copies of the soundtrack being sent up to Mark Ayres for his audio restoration work. As usual, much of the work was in the mundane clean-up of scratches, tape dropout and the like and was mostly undertaken on Scratchbox.

Whilst we knew that the Brighton Beach film sequences had survived the BBC's best attempts to destroy them and existed in private hands, we were unable to locate them and so the original transfer was cleaned up on Scratchbox. Ironically, only two weeks after the assets for this release were delivered, the film sequences turned up on e-bay and we subsequently won the auction. As the authoring house had yet to start encoding the episodes, there was time to have a new Spirit transfer made and cleaned-up on Scratchbox. The resulting transfer has rather more image area and is much sharper. Red and brown tones, which were hard to differentiate in the original version are now clearly defined and the overall image is much more pleasing. 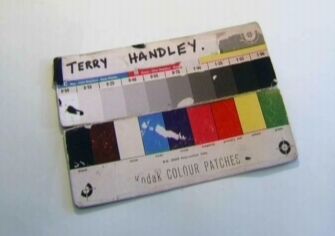 Given that 'The Leisure Hive' was the first screening of the brand-new title sequence, we were frankly shocked to discover just how appalling it looked. It was very low in definition, very blue and extremely black-crushed - as with most Doctor Who titles, the results on the day were subject entirely to the skill and personal preference of the telecine operator playing them into the studio. Luckily, the original 35mm camera negative still exists - and crucially it includes the animation cameraman's greyscale and colour reference chart. By adjusting the telecine grading controls to make the chart appear correct, we can be assured that the colour of the sequence itself is exactly as it was intended to be when it was being shot. This correctly coloured transfer of the titles film was used as the new titles background, with replacement text superimposed over it by John Kelly. Whilst we appreciate that some people would prefer the titles to look as they did on transmission, our view is that they should look technically as good as possible - and thanks to the camera chart we can claim to know exactly how designer Sid Sutton intended them to look! The closing credit were also replaced in a similar way. Click here to view comparisons between the old and new versions of the opening titles and the film sequence.

As well as the original mono soundtrack and isolated mono music tracks, Mark Ayres was able to prepare an optional Dolby Digital 5.1 mix of the story's soundtrack. This was only possible because of the existence of the multi-track music and effects masters and a set of Shibaden open-reel videotapes of the pre-dub episodes, from which, after much noise reduction work, it was possible to lift useable dialogue elements from. Ian Levine was kindly able to supply two U-matic tapes containing partial studio sessions for the story, from which it was possible to lift some of the lines in higher quality than available on the Shibadens. [More details to follow!]

The commentary is by star Lalla Ward, director Lovett Bickford and script-editor Christopher H. Bidmead, who don't pull their punches as they deliver an entertaining and insightful look at the making of the story.

A comprehensive extras package has been put together, the centrepiece of which is A New Beginning, a thirty minute featurette produced by Ed Stradling, looking at the changes that JNT brought to the series, with particular reference to 'The Leisure Hive'. It includes interviews with the late John Nathan-Turner (courtesy of Bill Baggs), Tom Baker, Lovett Bickford, Christopher H. Bidmead, Sid Sutton, composer Peter Howell, John 'K9' Leeson, assistant floor-manager Val McCrimmon and costume designer June Hudson.

Richard Molesworth follows up his recent 'Behind the Sofa' featurette on Robert Holmes with From Avalon to Argolis, a fourteen minute look at the writing and script-editing side of the story with writer David Fisher, Christopher H. Bidmead and contributions from John Nathan-Turner.

Synthesizing Starfields is a nine minute look at the creation of the new title sequence, with Sid Sutton and Peter Howell, along with archive footage of Howell demonstrating the build-up of the theme in the Radiophonic Workshop. This first contribution from Steve Bagley includes some nice story-telling devices and shows much promise for future featurettes.

Steve Broster, the editor of both 'Behind the Sofa' and 'From Avalon to Argolis' has produced Leisure Wear, a seven minute featurette with June Hudson talking in depth about the costume designs for 'The Leisure Hive' and her re-design of the main character's costumes for this season.

From the archives of children's magazine programme Blue Peter comes a four minute look around the Longleat Doctor Who Exhibition during its between-seasons Spring-clean, including the first ever on-screen interview with incoming producer John Nathan-Turner.

As usual, a full Picture Gallery and subtitle Production Notes are included, along with the nearly obligatory Easter Egg.

Copyright Steve Roberts, 31 March 2004. No reproduction of any part of this article is allowed without permission!