Representing the Fifth Doctor in the fortieth anniversary line-up, 'Earthshock' is a pacy, well-regarded story that saw the surprise return of the Cybermen after an absence of six years...

'Earthshock' was recorded on 2" quad videotape with 16mm film inserts as per the normal production methods of the early eighties. As part of the archiving deal with the National Film and Television Archive, the quads are no longer the property of the BBC, but were transferred to D3 digital videotape as part of the Quad Archiving project at the end of the last century. The D3 copies are the official BBC transmission masters now and it was these that we worked from in the preparation of this release.

All four episodes were transferred to Digital Betacam videotape via the Transform PAL Decoder, the revolutionary colour decoder invented by the BBC Research Department. This ensures the best possible decoding of the composite video signal into the component format required for DVD use, minimising cross-colour artefacts whilst at the same time maximising the high-frequency luminance detail in the picture. A low level of DVNR was applied to remove general video noise throughout.

Part Two was found to have a quad banding problem, which resulted in several horizontal stripes of picture which were noisier than the rest. The banding is visible throughout, but becomes worse from the middle of the episode onwards. As this has not been reported before, it was possible that the problem was caused by a partially clogged video replay head on the quad VTR which had played out the episode to D3. The paperwork suggested that the problem was inherent in the quad recording, but to be on the safe side a new D3 transfer was requested from the NFTVA. This turned out to be identical to the first, proving that the problem was indeed inherent in the original recording. It is possible that the fault was not there on original transmission but developed later due to partial erasure of one video track by being played on a VTR with a magnetised head, but this is unlikely. Indeed, careful analysis of the clip from part two used in the 'Did You See...?' programme in the week of its transmission shows the same problem, so it's highly likely that the episode was always like this. In order to reduce the effect as much as possible, a protection matte was made up and used to key a higher level of DVNR noise reduction into just those areas of the picture which were affected, leaving the rest of the picture untouched.

Videotape dropouts, shifted fields following edits and other normal analogue videotape problems were painted out manually as usual. Some noisy keying around the edges of CSO'd scanner screen effects were cleaned up as part of this process. New beginning and end titles were made up, using new transfers of the clean backgrounds combined with either the original captions or new electronically generated captions as required.

Unusually, the film sequences for the story still exist in the BBC Library. As well as the transmission print, the original camera negatives exist, made up into A and B rolls,  and it was decided to telecine these on the Spirit for maximum quality and reinsert them into part one. Each roll was telecined separately and then the two were recombined on videotape and cleaned up on Scratchbox to a very high level. Because of the splice joins between picture and blanking on each roll, there is some minor picture instability (a slight vertical hop) noticeable a few frames before some shot changes. This has been reduced as much as possible and is a small price to pay for the much improved picture quality. The shots of the motion tracker scanner screen were digitally stabilised and some of the supposedly 'invisible' edits mid-shot were remade so that there was no movement in the picture at the edit. The opening shot of a deserted moor skyline was a stock shot used in 1981 and not part of the film sequences for the story. The opening titles mix out into this shot, so it was necessary to recreate it and extend it to allow the new titles transfer to be mixed out in the same way. The shot was graded to match the first shot of the film sequences proper, then extended to the required length as a freeze frame. The clouds were slowly moved sideways to mimic the movement of the original, then artificial grain applied to the composite shot to match it with the film sequences. The close-up zoom around the motion tracker screen halfway though the episode was originally done by using a DVE to move around a very obvious video still of the screen. This was remade using the appropriate running film sequence and zoomed on Inferno to give the feel that the move was done optically and to better match it with the rest of the film shots.

Below are two examples of shots from the original film transfer compared to the new transfer. Roll your mouse over the original to reveal the new. Note the increased resolution, saturation and extended picture area and the absence of interlace feathering around objects (caused by an incorrect offset in the scanning fields of the telecine used in 1981). Note also the dramatic increase in cloud detail in the sky, which really helps to add to the mood of the piece. The images are in digital video non-square pixel aspect, so they will appear slightly squashed sideways on the page. The soundtrack was sent to Mark Ayres to be cleaned up separately and then relaid back onto the videotape. Here, Mark explains the work he had to do...

"Audio remastering for "Earthshock" was straightforward. I replaced the theme music at all episode openings and closings from the original master, as is usual, carefully rebuilding the cliffhangers and reprises to dovetail neatly. All episodes were fairly noisy (hiss!), but a fairly gentle noise reduction has improved this no end. There were a number of poor audio edits in the programmes - mainly during episode one on the film/video transitions, but also three particularly poor ones during TARDIS scenes. These have all been disguised. A couple of untidy edits (including a drop-in for some cyber-dialogue in part four) remain, however, as there was not enough clean material to cover. These are fairly minor, and not too troubling. There was a fair amount of distortion at points, including a slightly overmodulated line on film in episode one, and some peak distortion during the cyber breakout at the end of episode three. All of this has been repaired. The freighter explosion at the end of episode 4 was taken from a very crackly sound effects record: it crackles no longer. "

As with 'The Ark in Space' and 'The Dalek Invasion of Earth', it was decided to offer the viewer the chance to view the story with some effects shot replaced by more modern versions. Two areas immediately came to mind - the pink and magenta striped rays of the trooper guns and the demise of the freighter at the end of the story. 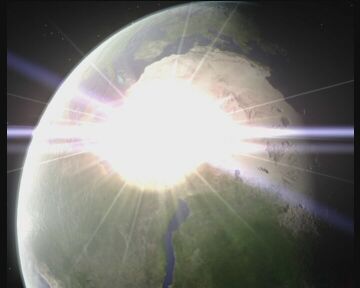 Mike Tucker and Nick Sainton-Clark at BBC Visual Effects were tasked with producing the freighter destruction. Having viewed the story, we realised that it would be quite economical to do if we retained the original freighter model shots used up to the middle of episode four and then replaced the effects from that point. This meant generating a CGI model of the Earth to replace the painted one originally used and placing it into the viewing screens as required. Fortunately the shots of the viewing screens came from locked-off cameras and none of the actors actually moved in front of the screens, so it was easy to replace the old Earth with the new one. Towards the end of the show, the original shots of the freighter pulsating before it explodes were replaced by a shot of the continents getting closer and closer from Adric's point-of-view and shots of the freighter traversing the arc of the Earth, the second shot showing a trail of fire as it begins to burn up in the atmosphere. Judder was added to the shots of Adric as he awaits the inevitable, to suggest the buffeting of the freighter through the atmosphere. The last shot is of a huge explosion and shockwave across the planet as the freighter finally detonates, which mixes back to the shocked TARDIS crew as in the original version. The modelling and texturing were carried out by Nick and Mike and the effects were composited on Illusion by Ian Simpson at BBC Resources 3D and Video Effects.

Dave Jervis at 3D and Video Effects was responsible for the new trooper gunfire effects. The originals had been done 'live' in the studio gallery by Dave Chapman, using an EMI pattern generator, keyed into the picture by positioning pieces of cardboard over the bed of a caption camera. Each ray required going down a further generation of videotape, so the shots with four individual rays were extremely noisy! Unfortunately the original clean studio backgrounds no longer exist, so Dave Jervis was forced to 'cut and paste' clean sections from before and after the gunfire effects in order to provide him with clean background plates, or simply place his new effect over the top of the original. The new effect was animated on After Effects and retain some of the look and character of the originals whilst appearing somewhat more realistic. Beams are accurately anchored to the gun barrels they were supposed to be coming from and move with the barrels. Some interactive lighting was also added to further sell the shot by making it appear that the light from the beams was actually falling on the troopers firing the guns.

The new effects are offered as an alternative to the originals and have to be switched on by the viewer, otherwise the original effects play out by default.

A commentary was recorded with the full TARDIS crew for this story:- Peter Davison, Janet Fielding, Sarah Sutton and Matthew Waterhouse. Extras for this release include:-