The fourth DVD release of 2002 finally sees William Hartnell's original Doctor making his digital debut, in the acclaimed first-season historical 'The Aztecs'. Dropped back a couple of places in the release schedule, 'The Aztecs' promises to be a landmark DVD release for the Restoration Team's new videoising process... 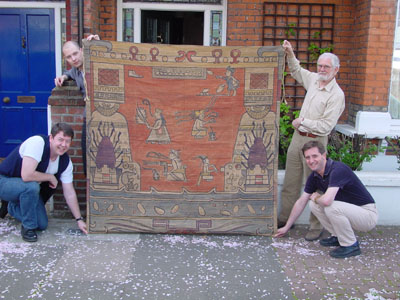 By rights, 'The Aztecs' was due to be the second DVD release of 2002, following on from 'The Tomb of the Cybermen', but had already been dropped back one place to third position so that two black and white stories were not released back-to-back. However, after the successful use of the newVidFIRE™ videoising process developed by Peter Finklestone and used on the first two episodes of 'Planet of Giants', the team were eager to apply it to a story due for DVD release. Because of the extra time involved in processing the story (currently a week per episode), it was decided to swap 'The Aztecs' and 'Carnival of Monsters' to give us a little more time to ensure that the results were as perfect as possible.

The BBC's archive holdings for the story are rather a mixed bag, consisting of a set of film-recording negatives and various prints struck from these,  three prints which had been returned from Cyprus in 1985, and a set of magnetic soundtrack films. Additionally, a private collector holds an Arabic version of episode four which came from Morocco.

To begin with, the set of negatives were called up from the library and transferred 'raw' on the Spirit telecine on Digital Betacam videotape. Both the magnetic and optical soundtracks were dubbed across, the former being a lot clearer but much hissier and slightly peak-distorted, and the latter being less hissy and distorted but covered in optical pops and crackles. The film-recording slates were still on the front of the films and gave the recording year as 1967, three years after their BBC transmission. All four recordings were of the 'stored-field' type, where each film frame contains both of  the original interlaced video fields. Episode one starts off looking rather soft, grainy and generally poor, but within a few minutes, things improve considerably. Judging by the amount of black dirt in the picture, it would seem that the original negative had been damaged at some point and a section of dupe neg (effectively a negative made from a print made from the original negative - so two film generations down) cut in to replace it. To confirm this, we called up episode one of the Cyprus prints. These were suppressed-field film recordings (only one video field transferred to each film frame, thereby halving the vertical resolution of the picture and giving a very 'steppy effect') made on the day of the BBC transmission, almost certainly recorded as the episodes were being broadcast. The image quality at the beginning of both films was comparable (although the vertical resolution was much better on the 1967 negative as expected), but whereas the quality improved on the neg after a few minutes, the print remained much the same throughout, which tends to support the idea that the beginning of the neg was a duped section. No doubt careful examination of the negative would reveal a tell-tale splice, but it had been safely returned to the library by this time.

Episode two was generally of excellent quality throughout, but episode three and four suffer from a certain amount of picture instability - very similar to that which affects the first episode of 'The Tomb of the Cybermen'. Episode three was the worst of the two, so the Cyprus print was called up and checked. Although the instability wasn't visible, the quality of the pictures in general was markedly lower, so we would not consider using this instead.

The privately-owned print of episode four was also transferred - not for the pictures, which were good but unfortunately suffered from scratching throughout, but for the audio, which had been dubbed into Arabic. Interestingly, Richard Rodney Bennett's musical score had not been used for the Arabic version, but had been replaced by unknown music which sounds more like that used in the famous French series 'Robinson Crusoe'.  The pictures were very similar to the negative of episode four, but crucially not identical. The recording date was still on the front of the film and showed it had been made six months after the 1967 negatives, in November of the same year. So at least three independent film-recordings had been produced from the videotapes of this story... 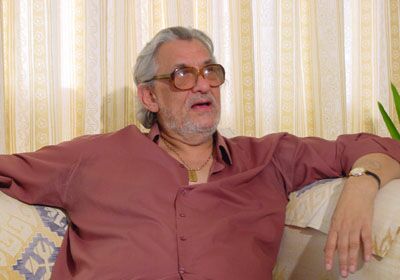 The raw transfers of all four episode were then dubbed onto another set of tapes, via DVNR to clean up the smaller dirt and sparkle problems and to reduce the grain. During this process, many of the vision cuts were tightened by one or two frames to remove 'dirty' cuts caused by the process of film recording non-standard vision mixer cuts. In an ideal world, the film recorder would record both fields from the same video frame, keeping everything nice and tidy. In practice however, the vision mixers of the day did not cut nicely between the outgoing field two and the incoming field one, but would cut randomly on either field. This produces film frames which contain a mix of both the outgoing and the incoming shots on cuts. In addition, the film recorder itself may be one field out of sync with the incoming video, which means that even correct field one vision mixer cuts produce dirty frames on the film. At least the vision mixer used in the studio for 'The Aztecs' did actually cut between fields, unlike the ones used for some of the earlier stories, where the cuts were mid-field and very dirty.

A couple of film recorder off-locks were noted, but it has been possible to correct them by judicious use of a frame store and vision mixer to move parts of the picture around into the correct position and carefully mix various parts of the frame together to repair it.

Episode one has already been cleaned up via Scratchbox, with approximately 2000 corrections made. The remaining episodes were somewhat cleaner anyway, so were sent up to Peter Finklestone, who repaired the remaining faults prior to applying his videoising process.

Peter explains the work he had to do...

"Episode one's title sequence was particularly poor (in keeping with the opening few minutes of the episode) and even after careful deblobbing would not look good. Therefore, the opening sequence play-ins for the other episodes were examined and part 4 was found to be a virtually perfect match in terms of geometry, as well as being clean and long enough to drop into part one. The stock footage of the storm near the end of the episode was retouched with around 3000 individual repairs in the single eight second sequence! Episode two is the best quality film recording of the story, being detailed with good contrast rendition, relatively little geometric distortion and minimal print damage. Episode three has a similar look to episode two, but unfortunately suffers from a great deal of distortion locked-in from a jittery Quad tape replay, which cannot be corrected with current techniques. Episode four is a little better, but not quite up to the standard of part two. Each of these episodes needed around 2000 repairs. Three passes were made to make sure as many defects as possible were removed prior to VidFIRE (Video Field Interpolation Restoration Effect) processing.

The film inserts for episode two are out-of-phase and therefore show a marked quality difference compared with the surrounding VidFIRE material. Fortunately the episode three inserts are in phase and look much better.

Viewing the end credits on the caption roller, even after VidFIRE processing which made the motion smoother, I realised that the quality let the episodes down somewhat due to excessive blurring, geometric distortion and film weave (none of which would have been on the original broadcast as they are all film recoding artefacts). I tracked down a very close match for the original font used in the Hartnell era (which were originally produced on large rollers using Masson-Seeley hot foil printing presses in Smith's Yard at Lime Grove) and reproduced the original roller for each episode. Where feasible, I also took the opportunity to re-key the episode and writer captions to remove the instability on the film recording.

Due to popular request, a restoration featurette has been made in similar style to that on 'Tomb of the Cybermen' explaining some of the work with before and after comparisons. This has further examples of VidFIRE and other treats, and runs to eight-and-a-half minutes."

Only those parts which were originally studio video were videoised, leaving film sequences and opening titles as film.

The audio was lifted off onto DAT and   sent up to Mark Ayres for a complete restoration. Much of the noise and peak distortion was improved or removed, but the soundtrack still betrays its poor-quality film originated source. Some of the sound on the original telecine play-in of the film sequences was found to be out of sync, so Mark has corrected this.

Over the weekends of the 13th and 20th April 2002, Peter Finklestone, accompanied by cameraman John Kelly and programme historian Richard Bignell, interviewed actors John Ringham (Tlotoxl), Walter Randall (Tonila) and Ian Cullen (Ixta) for a featurette about their work on the story, and designer Barry Newbery for a separate featurette concentrating on the story's design. Barry was kind enough to give the team access to a large folder of production photos from the story, the majority of which have never been published before.

These interviews have now been edited down into two documentaries which, along with an item  about the restoration of the story, form a trio of linked featurettes for the disc:-

Other DVD extras will include:-