'The Ark in Space'

By rights, the second DVD release of 2002 should be a William Hartnell story, in keeping with BBC Video's desire to see one story from each Doctor in the inital release cycle. However, BBC Video were reluctant to release a second black and white story immediately after 'The Tomb of the Cyberman', so the decision was taken to release 'The Ark in Space', the popular second story from Tom Baker's first season. 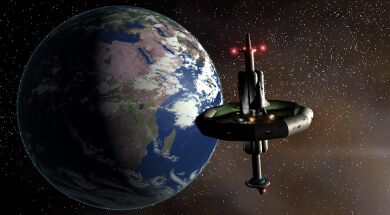 'The Ark in Space' still exists on its original 2" Quad videotape transmission masters. These masters are now with the National Film and Television Archive for safekeeping, with the BBC retaining D3 digital tape copies of them. The D3's were used as the source tapes in the remastering of the story, which required noise-reduction via DVNR-1000 and then manual repair of a large number of videotape dropouts throughout all four episodes. This work was carried out by Jonathan Wood, with the kind assistance of James 'Eagle Eyes' Insell on dropout spotting duty!

The sound was also lifted off onto DAT to allow Mark Ayres to remove some of the hiss and repair audio dropouts and static clicks. Here, Mark describes the work he had to do...

"I removed numerous static clicks from a number of scenes throughout the first two episodes especially. All of the worst affected scenes were set in the control room in which the TARDIS lands, so I suspect a problem with a mic during the studio recording on that set. There were many obvious dialogue dropins (ep.1 especially), these have been smoothed out where possible. Some distortion on the very opening music cue has been repaired,
as has a drop in level during the cue (probably an error in the original dub) and I have also repaired the very start of the cue which was slightly clipped. Numerous small dropouts were also repaired. About 6bB of broadband noise reduction was applied to the whole recording to reduce the hiss. Some scenes are very hissy still, however (the scenes of the Doctor and Harry exploring the Ark in pt 1, for example - the consequence of the music and effects tracks being brought up to try to disguise dialogue edits in the original dub). I spent around 22 hours in total doing this - including layoffs and laybacks.

I have prepared a track (15.47 total - fade to fit) of Space Sound to cover the effects shots. This is in stereo, and was remixed from the original mono masters of sounds from the episodes "The Wheel in Space", "The Dominators" and "The Ambassadors of Death" (all by Brian Hodgson)."

Extras for  this release include:-