BBC Video are marking Doctor Who's 35th anniversary by releasing stories from each Doctor in 1998. The story chosen to represent William Hartnell's era is the 1966 four-parter 'The Ark'. The Restoration Team were asked to supervise remastering of this story for the video release. 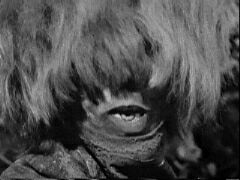 No specific restoration was required for this story, it was simply our aim to remaster from the best available copies of each episode. The situation was complicated somewhat by the fact that although the original 1967 BBC Enterprises 16mm film recording negatives were safely stored in the BBC Film and Videotape Library, there were no actual prints available for some episodes. The library does not normally release negatives, especially archival masters, for fear of possible damage, so we had planned to have new prints struck specifically for our use.

However, a very short notice deadline imposed on us by the BBFC certification process forced us into a situation where the library did not have enough time to have the prints made. Thanks to our good working relationship with the staff at the library, we were given special permission to transfer three of the four episodes directly from the original negatives, with the other being taken from an archived 'finegrain' print (a very high quality print used for making safety negatives from - the motion-picture industry would refer to this as an 'interpositive').

The remastering was carried out on 24th May by Dave Hawley, with Steve Roberts supervising. All four episodes were transferred via the wetgate telecine for optimum picture quality and to hide any minor scratches or other surface imperfections on the films. Episodes one, two and four were transferred from the negatives, with episode three being sourced from the finegrain print. Quality was excellent throughout, with the exception of a very small amount of tramline scratching which was printed into episode three's film. The soundtrack was sourced from the optical track on the film, as no original separate magnetic soundtrack existed - the few that were in the library were only safety copies made from the optical track anyway. Unusually, the original paperwork still in the film tins indicated that magnetic soundtracks had not been recorded when the film recordings had been made in 1967. We processed the audio through a Dolby optical cleanup system to reduce the hiss and background noise, although this was marginal in any case because of the quality of the films.

The pictures were processed through the Digital Vision DVNR-1000 as usual, to minimise dirt, sparkle and grain artefacts. A small amount of manual cleanup was carried out to reduce some recorded picture disturbances caused by a fault during the recording in 1967, and to remove a large blob of dirt from the beginning of episode three. This dirt actually appeared to be on the original insert film and would have gone out like that on transmission in 1966. We took the view that it was not the production team's intention that it should have appeared there, so we removed it by substituting a small section from the previous frame over it.