On paper, 'Timelash' has so much going for it... The Sixth Doctor and Peri had already established themselves over a number of stories, the primary guest actor was a stalwart of another hugely popular BBC science-fiction show, and the story itself played a great trump card by throwing a real person from literary history into the mix. Yet most people believe that the story turned out to be one of Doctor Who's greatest-ever clunkers. Perhaps a re-examination via this new DVD release might redress the balance somewhat? 'Timelash' was produced entirely in studio on 1" analogue videotape in the 45-minute format and so the remastering path followed our standard route - the D3 digital videotape copy of the original transmission master was Transform Decoded onto Digital Betacam and was graded by Jonathan Wood and cleaned up in the usual manner.

Episode one had problems with severe dropout during later part of the episode, especially during the scenes in Herbert's study. Although this was lessened by judicious use of DVNR, much of the problem had to be fixed manually by painting them out frame by frame. A bad edit as the Timelash is operated was repaired.

In episode two, the 1" transmission master tape was scratched from around 13' 27" through to 20' 43". This seems likely to have been caused on either technical review or during transmission, as off-air tapes show the damage. You can see the scratch starting intermittently, then gradually becoming constant around the 17' mark, and then increasing in size from one picture line up to around 6 lines at 20'; the damage stops suddenly suggesting the cause of the problem became dislodged from the tape path. The early scratch was easily concealed with DVNR requiring only occasional manual deblobbing; later on the more severe damage was generally able to be painted out invisibly.

However, the last minute of damage was more troublesome, particularly as the damage crossed areas on fine detail such as characters' faces in long shot and the Doctor's costume. Fortunately we had access to a  U-matic copy of the episode from John Nathan-Turner's estate, which had been dubbed off prior to the tape being damaged. This was used to repair the worst of the damage. The scratch is still visible in these scenes if you look for it (and the U-matic is vastly lacking in fine detail compared with the broadcast tape) but is now much less apparent.

For the most part, the audio side of the Timelash restoration presented few problems.  Standard noise reduction was applied, with the titles music replaced from master recordings. Some edits were tidied, and dropouts repaired.  The second  track on the video master contained the undubbed studio sound and, although we had decided that this story would not benefit from a stereo or surround remix, this enabled Mark Ayres to tweak the mix on a  couple of short sections where dialogue was not as audible as perhaps it should have been. 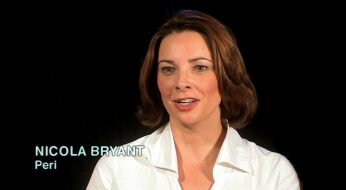 This release will be first to feature a 'Coming Soon' trail which will act as a taster for the next DVD release, specially made by Brendan Sheppard.

As usual there is a photo gallery, production subtitle notes and Radio Times listings in pdf format.