This release is a mini-boxset release of the consecutive (albeit season-spanning!) Fifth Doctor stories 'Time-Flight' and 'Arc of Infinity', thematically linked by Janet Fielding's character, Tegan, who is left on Earth at the end of the former and  re-united with the TARDIS crew in the latter. Although one of the less obvious story pairings, it is part of the push to try to get more product out to the viewer, and both stories contain some very interesting extras specially brought together for this DVD release.

Both stories were produced as a mix of 2" analogue studio videotape and 16mm location film. The picture remastering path followed our standard route - the D3 digital videotape copy of the original transmission master was Transform Decoded onto Digital Betacam and was graded by Jonathan Wood and cleaned up in the usual manner. In the case of 'Time-Flight', the original 16mm A/B roll camera negatives still exist in the BBC library and were retransferred and dropped back into the restored masters as per our recent work on 'Castrovalva' (see the 'New Beginnings' article for more information). Some video effects work needed to be re-done as a consequence, notably the 'Concorde taking off from pre-historic Earth' sequence.

Videotape condition was generally very good, with below average amounts of drop-out for its age. However, this was countered by the challenge of integrating the newly-transferred and graded film inserts, which amount to about an episode's worth of material. Being transfers from spliced negatives, all sequences had a noticeable "bump" adjacent to film edits (caused by the splice slightly snagging on rollers in the telecine transport), which were repaired digitally. Dirt and sparkle were painted out as normal.

Two shots appearing in the final programme were not on the film inserts. One of these was the sequence of cloud into which Concorde disappears in part one and emerges from in part four. Closer examination showed that this was simply a digital zoom into a section of the stock footage of Concorde. This effect was remade in the same way, but using a modern software system to lose less quality (ideally we would have done a zoom into the film whilst on the high-resolution telecine, but the negs had been sent back to the archives by the time the need was identified). Given the grainy quality of the film stock, it probably would have made little difference. A lollipop to the first person who spots the other piece of film surviving from the original transmission tape. It is fortuitous that the film inserts exist, as many of the sequences in the tape show nasty Polygon telecine artefacts such as double-imaging on many shots.

One early film shot on the Concorde's flight deck in part one has a deep scratch down the left side (visible on transmission too) and this was concealed as well as possible using a combination of Furnace's channel repair (to neutralise the deep blue from the neg's base layer) and scratch repair tools.

As with 'Castrovalva', a few effects composites had to be remade. The TARDIS hovering above the runway in part one and the Master's TARDIS materialising above the Doctor's at Heathrow in part four were easily achieved. The shot of Concorde taking off from primeval Earth was more challenging, requiring the original model shot of rocks to be isolated. The stock shot of Concorde approaching the camera along the runway was stabilised so it no longer weaves from side to side behind the steady rocks, and heat haze and film grain was added to the model element to match the aircraft. The following shot of Concorde flying away above the citadel was also stabilised. 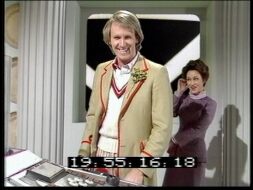 Although 'Arc of Infinity' had a large amount of location film, sadly this is no longer known to exist. The film is quite grainy, with low resolution, and the transfer showed noticeable twin-lens flicker in places, so most of the film was deinterlaced to remove this. Although DVNR took out some light dirt and sparkle, there remained a large amount of work to remove remaining defects. Many of the film edits were unstable too, showing a marked bump, which had to be repaired.

Tape condition was about average, except for part two which suffered throughout from severe dropout; consequently restoration of this part took twice as long as the other three episodes combined!

On the audio side, Mark Ayres had a few problems to contend with, not least with the noise levels on 'Arc of Infinity'... "The master tapes for this story were very noisy, but when we first looked at it some months ago, Israeli company Waves had just introduced their new Z-Noise plugin, which I used for the first time on this project and which enabled me to push noise reduction further than before. Listening to it again a few months later (the release was delayed, and in the meantime I had remastered a few other stories and gained more experience with the software) I backed it off slightly, yet still received a better result than had been possible previously. As ever, though, we can never achieve perfection - there is only so far you can push the process before undesirable side- effects take over, especially where multiple noisy sources have been used for the original mix. The tapes also had many small dropouts which needed patching, and edits to tidy. Some inconsistent levels were evened out. At about seven minutes into episode one, the reverberation effect used for the Amsterdam crypt was mistakenly left on during a scene in the Time Lord Capitol Communications Room. I have rebuilt this scene from original elements: dialogue was taken from a VHS recording of the original studio session kindly loaned by Ian Levine, with effects and music taken from the original masters.

The master tapes for 'Time-Flight 'were, like 'Arc of Infinity', very noisy, and riddled with dropout which needed patching. Many edits were tidied. Some studio noise (especially on the prehistoric earth set) was reduced where possible. The sound for the very opening scenes of episode one was re-laid from the original film magnetic master, saving a couple of generations and leading to a cleaner start to the story. Later, where the recording was mixed with music and additional effects, the advantages of rebuilding the mix would have been negligible."

Richard Molesworth has produced Mouth on Legs (dur. 13' 36"), our first ever on-screen interview with Janet Fielding, in which she talks about her time on the show.

A Deleted and Extended Scenes package (dur. 3' 46") is included, taken from both broadcast quality and timecoded viewing copies of the studio recordings and early edits.

Out-takes (dur. 13' 52") - a collection of humorous fluffs and technical gaffs from the story's production.

From Keith Barnfather's extensive collection of interviews produced for his Mythmakers video releases comes this Peter Grimwade interview (dur. 4' 11") from 1987, in which the late writer / director talks to Nick Briggs about his writing work on this story.

As always, there's a photo gallery, 'Coming Soon' trailer and production information subtitles, along with the 1983 Doctor Who Annual and Radio Times listings in pdf form.

Arc of Infinity boasts an even wider variety of features:-

Keith has also produced The Omega Factor (dur 14' 55") in which writers and actors involved in the various Omega stories look at the character and motivations of the renegade Time Lord. Featuring co-creator Bob Baker, writer Johnny Byrne, actors Stephen Thorne and Ian Collier, and writer Nev Fountain, who continued Omega's story in an audio play from Big Finish.

A Deleted Scenes package (dur. 2' 54") is taken from a timecoded viewing copy of an early edit of the last episode.

Under Arc Lights (dur. 11' 30") goes behind-the-scenes in the studio courtesy of timecoded viewing copies of some of the studio recording sessions. Both of these features were put together from tapes given to Ian Levine by the story's director, Ron Jones.

A BBC1 trailer and continuity announcements are included, along with the usual photo gallery, 'Coming Soon' trailer and production information subtitles. For completeness, the 1983 Doctor Who Annual and Radio Times listings are included.

Copyright Steve Roberts,  4 May 2007. No reproduction allowed without written permission.