In 2006, we went right back to the genesis of Doctor Who with 'The Beginning' boxset, and now in 2007 we take you to the other end of that unbroken twenty-six year run of stories. In many ways 'Survival' serves as a template for the new series that came along some sixteen years later. This feature-packed two-disc release examines both the making of the last ever 'classic' Doctor Who story and offers an intriguing look at what might have been in store for the Doctor and Ace in Season 27...

'Survival' was recorded on location on 1" portable videotape recorders, edited on 1", and exists now in the BBC library as D3 digital cassette copies of the transmission masters. As usual, the D3's were transferred through the BBC's Transform PAL Decoder, then graded and noise-reduced to Digital Betacam by Jonathan Wood, before manual removal of dropouts and other normal analogue tape problems. Video noise was something of a problem especially on certain set-ups like the Hale & Pace section and the scenes when Ace talks to an old friend in the street. As always, it's a delicate balance between reducing the noise and causing a certain amount of smear.

Grading the story proved slightly more challenging than normal, due to the show being made entirely on location in varying lighting conditions, and also because of the video effects added to the off-Earth sequences in order to give the planet pink skies, as Jonathan explains:

"It was obvious that the alien dimension of the cheetah people was intended to have a particular feel in order to help differentiate it from normal reality. However, when I took a look at episode two, I realised this desire had manifested itself as really a far too high degree of de-saturation, to the point that even some of the shared scenes from the end of episode one didn't match properly. With the more powerful grading tools available today it was possible to have an increased level of colour (helping to breath a certain amount of life back into the image) whilst maintaining the alien feel and predominately warm pink bias. This boost also revealed some extra luminance keying work that had been applied to the sky in many shots, adding some pink to it. Unfortunately, it was now easier to tell that some shots within individual sequences hadn't had this additional process with the sky returning to its normal blue/white. Therefore, after the grading stage these "missed" shots had a tint added via a luminance key in exactly the same way as the others had had back in 1989. Other than this, the grading stage across all three episodes was generally a matter of bringing a consistent balance between camera set-ups, reducing colour casts from interior lighting and adding to (colour wise) some original effects. Hopefully, the end result should be images with a little more punch than exists on the original analogue masters."

Some of the slow motion effects (such as Karra rearing up on her horse, Ace turning to camera at the end of part two, and Karra & Ace running across the desert in part three) were originally achieved with variable speed VTR playback. This was crude and simply repeated fields, giving a jerky effect with an unpleasant vertical jitter. The repeated fields were therefore removed and the whole sequences retimed to give a smoother look. The alien planet sky effects were originally animated at low rates, varying between 4 and 10 frames per second so, again, duplicate fields were removed and the sequences retimed to give a genuine 50 field motion matching the foreground video.

In the same vein, some of the composite shots of the planet surface and sky were a little wobbly so, where necessary, the elements were isolated, stabilised and re-composited. The most notable example was the shot of the Doctor and Paterson crossing the desert on horseback.

As early edits of all three episodes are still retained by the BBC library, it was possible for Mark Ayres to rebuild the soundtrack in Dolby Digital 5.1 multi-channel surround, bringing an entirely new and immersive viewing experience to the story. "When I suggested creating a 5.1 mix for "Survival", I rather had it in mind that it wouldn't be too taxing: planet noises, some cats, and a few materialisations. But I was reckoning without Alan Wareing's love of busy sound mixes, something I should know about having scored two of his three Doctor Who's.

First up, I remastered the original stereo broadcast mixes which form the default soundtrack on the release. They are somewhat over- dynamic for broadcast, and would have been rather squashed by the presentation limiters on transmission, but I decided to leave them be for DVD, simply replacing some music, repairing edits and dropouts, re-syncing two instances of misplaced dialogue, and performing standard cleanup. This took a couple of days all-told.

For the 5.1, Dominic Glynn was kind enough to loan me the master DATs of his splendid incidental score. In addition, I have the Radiophonic Workshop copy of the original effects master (the original does not survive, which is odd; I suspect it may be misfiled in the BBC Worldwide library but sadly we could not locate it) and some other reels which do actually survive in the BBC Worldwide library, consisting of additional effects.

When building the tracklay for the 5.1 I had the raw dialogue from the '71 edits which I reconformed to the final cut, plus the music and effects reels and music. There were two "winds", one "rumbles" and two "explosions" bands for the cheetah planet on the original effects tapes, but I made up my own additional wind sounds for surrounds (created entirely from treatments of the originals for authenticity) but also made up two totally new stereo rumble and bang tracks. And I lifted some pre-mixes from the surviving international M&E tracks to create loops. Brand new elements were created (again using the original sounds as a basis) for the LFE channel. 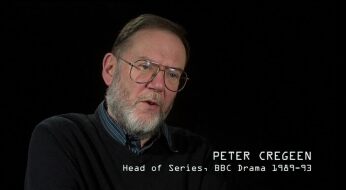 Unfortunately not all of the "cat" sounds were on the effects tapes, so I had to find suitable alternatives where necessary. Three sections gave me particular headaches due to missing elements: the start of Ace's conversation with Ange in part one, and the motorcycle battle and the Doctor's final speech in part three. At these points I resorted to using the original transmission mix, deriving left, right, centre and surround channels using various matrixing and filtering techniques. Luckily, most of the dialogue that does survive was recorded "MS" (Mid/Side) giving me plenty of options in the mix when it came to creating a surround image using similar techniques as above.

Three short bits of character vocalisation still eluded me, so I myself post-synchronised some dialogue, briefly playing two individual characters (I'll leave you to guess) and a crowd of teenagers in a gym.

I added many more cat, horse, and foley effects than were used on the original mix, as these elements were often quite exposed in surround, partly due to the obviously wider image, and partly due to the greater dynamics. Ace's "panting" sounds (when being chased by Karra) were on one of the Worldwide tapes, and are probably one of the sound team, or even Alan Wareing (!) - I was able to make a fair bit of these, and the horse's hooves, to give these sequences a bit of a lift. Balancing it all is tricky, and I do a number of passes, refining each time. Here I started off with a dialogue premix, then an effect premix. Then I balanced those two together, then did another pass where I added the music, tweaking dialogue and effects as I went, then a final sweetening pass. It builds up in layers, and I always check a stereo fold-down as well. I deliberately kept the "Earth" stuff fairly close, so that the cheetah planet sounded more expansive in comparison. And I hope that the gradual destruction of the planet is more obvious, now - the rumbles and bangs get slowly louder and more intense as the story progresses, and I also spotted up various dramatic points with off-screen bangs, picking up on the Master's line that the cheetahs' fighting influences the planet's disintegration.

It was probably, in fact, the busiest of the 5.1 mixes I have done so far - but I am never sure whether that is down to the stories, or the fact that I get more ambitious each time! I certainly hope, however, that the time will come when all of Sylvester McCoy's stories have a 5.1 mix to go with them."

Due to the large amount of material that was potentially available, a second disc was requested and approved. The contents break down thus:

Second Commentary (episode three only) - Fan commentary from the winners of a recent Doctor Who Magazine competition.

Deleted and Extended Scenes (dur. 9' 16") - material from the first edit of the story that didn't make the final cut, plus comparisons of some of the scenes before and after the video effects were added.

Out-takes (dur. 16' 24 ") - out-takes and comedy moments from the production of the story. These were compiled onto Betacam SP tape to show at the wrap-party and were part of the collection recovered from John Nathan-Turner's estate recently.

Continuities (dur. 3' 02") - continuities and trailers from the original BBC1 transmission.

Photo Gallery (dur. 8' 36") - production and behind-the-scenes stills from the making of the story.

Radio Times Listings - in Adobe pdf format for viewing on PC or Mac.

Endgame (dur. 44' 20") - Why was Doctor Who cancelled at the end of Season 26? What might have been in store for the Doctor and Ace if the series had continued into Season 27? Richard Molesworth's new documentary investigates 'the season that never was', featuring interviews with actors Sylvester McCoy and Sophie Aldred, script editor Andrew Cartmel, writers Ben Aaronovitch and Colin Brake, BBC Head of Drama Series Peter Cregeen, composer Mark Ayres and visual effects designer Mike Tucker. Narrated by Paul Ewing.

Search Out Science (dur. 19' 17") - a schools programme featuring the Doctor and Ace, with Stephen Johnson and K9.

Little Girl Lost (dur. 16' 30") - Originally commissioned for the 'Ghost Light' disc, but pulled due to lack of space, this featurette from John Kelly is a retrospective look at the development of Sophie Aldred's character, Ace, from her first story, 'Dragonfire' through to her last, 'Survival'. With Sophie Aldred, creator Ian Briggs and script editor Andrew Cartmel.

Destiny of the Doctors (dur. 13' 49") - Anthony Ainley's last appearance as The Master, in these links from the 1997 computer game.