Beneath the Surface - DVD Boxset

2008's packed UK release schedule kicks off with a real treat for Third Doctor fans, with this three story boxset comprising the hugely popular Jon Pertwee stories 'Doctor Who and the Silurians' and 'The Sea Devils', and their sequel from the Peter Davison era, 'Warriors of the Deep'. 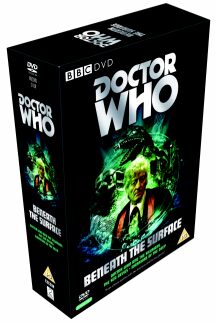 This release is probably our most technically challenging restoration project to date, bringing together just about all of the unique techniques and processes we have developed over the last few years.

'Doctor Who and the Silurians' was the first Doctor Who story to be made on colour videotape, the previous story 'Spearhead from Space' being made entirely on 16mm colour film. Unfortunately none of the videotapes survive, with only 16mm monochrome film recording negatives being retained by the BBC Film and Videotape Library. Domestic off-air colour NTSC Betamax recordings, made during mid-seventies US transmissions do exist however, and we previously combined these with the film recording prints way back in 1992 to create broadcastable  colour copies- see the article here. Technology and our own skills have moved on a long way in the past decade and a half however and so for this DVD release it was decided to go right back to the raw elements and rebuild the episodes from the ground up. This would include application of the VidFIRE process to attempt to recreate as closely as possible the studio video look of the original transmission.

Although the basic principles of the restoration would need to be similar to the 1992 recolouring work, as usual we returned to the best available sources. This meant using the 16mm FR camera negatives (rather than prints taken from them, as previously used), which in keeping with many from that time were recorded for BBC Enterprises at the time of transmission (effectively a recording of what the viewer would see at home, albeit a feed direct from the transmission suite, not "off-air" as such). This is interesting insofar as it shows just how many tape dropouts and visual disturbances would have been part of the original, authentic viewing experience in 1970. For the colour source, it was decided to use the Betacam SP recording made in 1992, on the basis that the passage of a further 15 years and the scarcity of professional standard NTSC Betamax recorders would make it extremely unlikely that a better playback could be obtained now.

In the end, to maximise flexibility, it was decided to start with a one-light ungraded Spirit transfer of the film, and a DVNRed, "ball-park graded" colour videotape copy for the basic clean up. This work was undertaken by Jonathan Wood at BBC Resources, then the tapes handed on to our cleanup team at SVS in Manchester.  They tackled the video defects in the usual way, with frame-by-frame deblobbing on each episode. Although this meant that 14 episodes had to be worked on in this way, it meant that the peculiar problems inherent to the different source formats could be tackled independently.

After clean-up, the monochrome film was VidFIREd giving a 50 field per second interlaced picture. The colour Betamax conversion was overlaid, with some episodes (or sections of episodes where different tape sources were used) shifted by 20 milliseconds to maintain field sync (which wasn't a problem when the previous version was produced in 25 frame per second film mode).

Tests were done to see if the high resolution film could be warped to match the (more) correct geometry of the VT, but was unsuccessful due to the very low resolution of the colour tape. Therefore, as in 1992, the colour was warped to match the (fairly minimal) distortion on the film recording. This was done predominantly in After Effects, with final tweaking done at the final overlay stage in Shake (to overlay the chroma from the videotape onto the luminance of the film in YUV colour space).

The final combined episodes were then returned to Jonathan Wood for a fine grade, and subsequently returned to SVS for a final check/clean-up pass and audio layback. Mark Ayres had already fully remastered the audio, using the off-air videotapes as his source material, during his work on the BBC Audio release of the same stories for the 'Monsters on Earth' CD release. Most of his work for this project involved matching up the remastered sound with the new pictures.

Some sections required special attention. The end of episode five and start of episode six were missing from the two available NTSC recordings, and had been computer coloured in 1992 by American Film Technologie. One option was to obtain a new computer colourisation of this section, but given that the surrounding sections are comparatively ropey (certainly compared with the rest of the story) it was felt that if this section was too good, it might only highlight the weakness of nearby colour – and there would not be the budget to recolour another five to ten minutes of material. Therefore the previous work was retouched, adding extra colour at the edges (as usual, there is more image visible in the new transfers) and regrading the section to correct a few small errors in the original colour palette.

Another missing section on the colour tape was the start of episode three, where the Silurian approaches the Doctor. In 1992 this was patched by slowing down a previous shot, but this rather stuck out like a sore thumb. Instead, the scene was manually coloured and motion-tracked back onto the original.

Opening titles and closing credits were remade from the 35mm background films as usual.

'The Sea Devils' posed an entirely different set of problems. Although D3 broadcast copies of the PAL transmission masters for the last three episodes exist, the lowest-generation masters for the first three episodes are NTSC standards conversions made in the mid-seventies for BBC Enterprises. These required processing using the Reverse Standards Conversion process developed for us by BBC R&D. See the articles on 'The Claws of Axos' and 'Inferno' for background details of RSC and the post-processing techniques we developed for producing the best results from this sort of material.

As usual with RSC, there is considerable noise in the image, along with cyclical "twittering" on horizontal edges from the original conversion process, which is problematic to remove. Any faults in the original recording are magnified, as well as the added problems from multiple analogue generations and standards conversion. The usual laborious frame-by-frame clean-up was performed, removing many dropouts, fixing tape off-locks and other picture distortions and disturbances. Many badly corrupted frames had to be completely replaced.

Although the overall grading of the episodes helped the look of the episodes, the film inserts suffered from marked twin lens luminance flicker and colour differences, so Furnace was used to match the level of the "bad" field to the "good" field in each film pair.

Episode five, although PAL, is badly scratched from around the 10 minute mark to the end. While the previous repair is very good, some of the fix lines are visible and distracting when crossing areas of very fine detail (such as people’s eyes, or hair, or Sea Devils' vests) so in places these areas were retouched from clean frames on the damaged original tape.

After such complicated restoration work, it was a relief to work on a story as comparatively simple as 'Warriors of the Deep', the first Doctor Who story to be made on the 1" videotape format. Although 1" was technically inferior to the 2" quad format it replaced in certain areas (particularly video noise and multi-generation picture degradation), it was a revelation for production, allowing such previously unheard of effects such as slo-mo, still frame and reverse play. It also allowed the editor to view pictures in shuttle and to jog to and mark edit points frame accurately. For the remastering of this story, we started with the D3 videotape copies of the original 1" transmission masters, which were transform decoded and graded by Jonathan Wood before being passed up to SVS for manual cleanup as usual. Often derided for being overlit, the high lighting levels here help to control the video noise, so the resulting pictures were of good quality.

A large extras package was put together to complement the three stories. 'Doctor Who and the Silurians' is presented split over two DVDs, with 'The Sea Devils' and 'Warriors of the Deep' occupying one disc apiece.

Now and Then (dur. 9' 39") - Richard Bignell's latest offering in our irregular series, comparing and contrasting the locations used in the story during production with how they appear today. Narrated by Geoffrey Palmer.

Musical Scales (dur. 13' 54") - producer John Kelly takes a look at an extraordinary era of musical experimentation within Doctor Who in the late sixties and early seventies, with special emphasis on the musical scores for 'Doctor Who and the Silurians' and 'The Sea Devils'. With producer Barry Letts, composer Mark Ayres and directors Timothy Combe, Christopher Barry and Michael Briant, with an archive appearance from Radiophonic composer Malcolm Clarke.

Photo Gallery (dur. 6' 01") - production and publicity photos from the story.

Hello Sailor! (dur.36' 37") - the trials and tribulations faced during the making of this classic Doctor Who adventure are discussed by members of the cast and production team in this highly entertaining featurette from George Williams. Featuring producer Barry Letts, script editor Terrance Dicks, director Michael Briant, actors Katy Manning and Donald Sumpter and stuntman Stuart Fell, along with Royal Navy personnel who appeared as extras during location filming. Narrated by David Cann.

8mm Film (dur. 3' 51") - an amateur cine film shot during location filming at the Royal Naval base by one of the sailors who appeared as an extra. With a commentary from director Michael Briant, producer Barry Letts and script editor Terrance Dicks.

Trails and Continuity (dur. 6' 18") - BBC1 trails and continuity recreated from off-air audio recordings made during the story's original transmission in 1972.

Photo Gallery (dur. 8' 38") - production and publicity photos from the story.

PDF Material - Radio Times billings for the story's original transmission, plus the Piccolo book 'The Making of Doctor Who'.

Warriors of the Deep

They Came from Beneath the Sea (dur 12' 53") - another Steve Broster featurette, focussing on the realisation of the story's non-human cast - the Silurians, the Sea Devils and the dreaded Myrka. Featuring Pennant Roberts, Peter Davison, Johnny Byrne, Mat Irvine, with actors William Perrie and John Asquith (Myrka front and rear respectively). 16:9FHA

Science in Action - (dur. 5' 58") - BBC Schools presenter Kjartan Poskitt talks to visual effects designer Mat Irvine about some of the techniques and plastic materials he uses in his job in this programme extract from 1987.

Photo Gallery (dur. 7' 42") - production and publicity photos from the story.