'Battlefield', the last remaining story from season 26 to be released on DVD, sees the Doctor pitted against a sorceress, a demon and an army of knights, in Ben Aaronovitch's mad mash-up of Arthurian legend and science fiction. 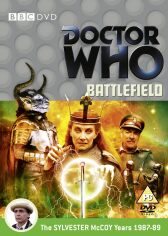 Previously released on VHS in an extended version (adding back four scenes from an earlier edit), 'Battlefield' has never been commercially released in its original transmitted form. For the story's DVD debut, we decided to follow the successful 'Curse of Fenric' model, presenting the story-as-transmitted on one disc and a movie-format extended edit with revised video effects and 5.1 audio on a second disc. Mark Ayres was again responsible for the new version, this time using the surviving tapes of the first edit to put the show back into script order as much as possible - in other words, to present a version closer to Ben's original screenplay.

Shot on videotape in studio and on location, 'Battlefield' survives as both over-length first edits (or '71 edits' in BBC parlance, a reference to the technical code given to the tape during editing) and final transmission versions, both on 1" analogue videotape. As we would be needing to go back to the '71s in order to build a new movie-format version, it was decided to base all our restoration work on these tapes to take advantage of the lower generation video quality of the earlier edits and to rebuild (or "conform") the transmission versions from them. This also meant that the digital cleanup only had to be done once, for the most part, with the cleaned-up and graded '71 tapes being used to generate both the TX and new movie format versions. Readers with long memories will remember that we infamously dropped the ball using this technique on one of our earliest DVD projects, 'Remembrance of the Daleks', omitting a couple of video effects shots which were not present on the '71s. Rest assured that the conformed version has been run side-by-side with the transmitted version to ensure that nothing had been missed this time!

Restoration commenced using D3 digital videotape copies of the '71 edits, which were Transform Decoded and graded / noise reduced onto Digital Betacam by Jonathan Wood. Ungraded Transform Decoded copies of the transmission version of the episodes were also produced. The tapes were sent off to SVS, where Peter Crocker repaired dropouts on the graded '71s and then conformed them to match the transmitted version. This process revealed a number of shots which were present in the transmission version, but not in the early edits. These shots from the ungraded transmission versions were sent back down to Jonathan Wood to be graded to match the surrounding shots, then returned to SVS to be dropped back into the new conformed master.

Meanwhile, Mark Ayres was using copies of both versions of the story to build the new movie-format version, using the original rehearsal and camera scripts as a guide. The transmitted version had been very tightly edited to fit its timeslot, with scenes curtailed, missing or transposed. Here, the story is allowed to unfold as originally scripted by Ben, with numerous cut sections reinstated - including some nice character moments and a couple of important explanatory scenes. New video effects were produced by Mark, John Kelly, and Peter Crocker, and three entirely new shots were also created - two aerial views of London (for use in the sequences where the Brigadier is flown over the city by helicopter) and one of lightning flashes over the Gore Crow Hotel during the Morgaine manifestation sequence. Many scenes were tightened up or re-edited to help improve the pacing, including the fights and the notoriously poor "Boom!" scene from the end of episode one. Once the picture edit was locked, Mark was able to track-lay music, effects and dialogue into his Nuendo workstation and build a new 5.1 multi-track surround mix. The original music score by Keff McCulloch (perhaps one of the most talked about aspects of the original production!) has been retained, but extensively re-edited to fit the new pictures, and now works around a far more involving effects track. A true stereo mix was also generated and is available as an option on the DVD.

Content producer Steve Broster was charged with putting together the extras package for the release, which includes:

• Past and Future King (dur. 12' 00") - Ben Aaronovitch and Andrew Cartmel look back at how the story was commissioned and written, with additional comments from Sylvester McCoy, Sophie Aldred, Nicholas Courtney, Angela Bruce and Michael Kerrigan.

• Watertank (dur. 6' 36") - illustrated with behind the scenes footage of the actual event, Sophie Aldred and members of the cast and crew recall the on-set accident that happened during the making of 'Battlefield', when a glass water tank shattered with Sophie still inside it. With Sophie Aldred, Sylvester McCoy, Michael Kerrigan and Andrew Cartmel.

• Studio Recording (dur. 18' 56" ) - behind the scenes on the studio recording of Battlefield, taken from a VHS tape made from the live studio output.

• From Kingdom to Queen (dur. 8' 06") - actress Jean Marsh looks back on her three appearances in Doctor Who.

• Trails and Continuity (dur. 5' 10") - BBC1 trails and continuity announcements from the original and repeat transmissions.