Can you help us?

Although the team was able to fully restore 'The Daemons', 'Terror of the Autons' and 'Doctor Who and the Silurians' back to colour, there are still other episodes for which no known colour copies exist. These are:-

The only known colour footage from this story is an NTSC Betamax recording of the first few minutes of episode six.


'Invasion of the Dinosaurs' (episode 1)

Again, no colour recording is known to exist. As above, this story was sold as a five-part story to American TV stations, with the black and white episode one being cut completely. We are only interested in a colour copy of episode one with respect to original UK transmission order - this would have an on-screen title of just 'Invasion'. 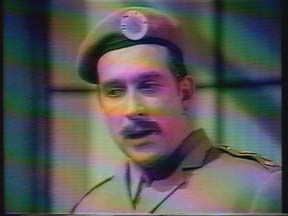 Colour copies sourced from an NTSC Betamax recording do exist for this story, but unfortunately every copy we have seen suffers from recorded interference. This manifests itself as a rainbow patterning effect, sometimes mild but sometimes very strong. The only episode which doesn't suffer is episode five, which we were able to restore. However we would still like a better copy of this episode to work with. All existing colour copies of this story seem to originate from a Betamax recording made by Tom Lundy in the seventies. If anyone has a contact address for Tom, we would be very interested in speaking to him.


On a general note, we would like to talk to anyone who possesses broadcast quality copies of any Doctor Who material - complete or partial episodes, film inserts, film recordings etc. Even if you know that the material exists in the BBC Archives, it is still possible that you have a better copy. Anyone contacting us will be dealt with in the strictest confidence - any material loaned to us would be cleaned, copied, and returned to you. Please e-mail either Ralph, Paul or Steve from our main homepage.